So I'll start with the last thing first, the challenges. I haven't been creating that much this week and what I have made I haven't taken the time to post because of EQ2. For those that don't know what that is, it's EverQuest 2, a massive multiplayer online role playing game. And it just so happens that they have free play for all Sony accounts during this month and since Paul just happened to finish his summer semester, we've been playing together once again. It's always fun to group and play with my hubby so any internet time I've had has been spent questing Norrath with him ^_~ 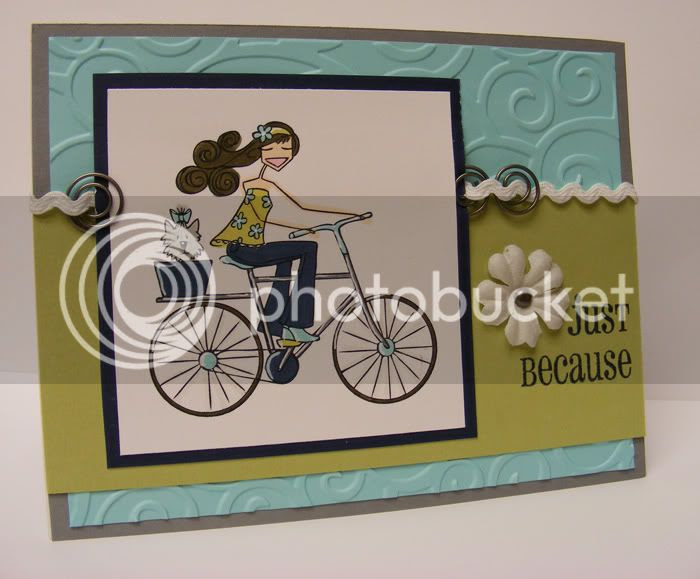 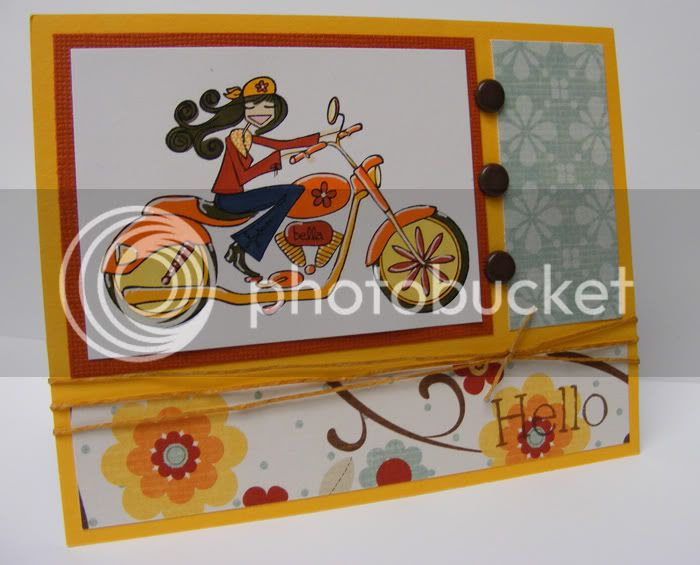 I did the Bella challenges Thursday and didn't even realize until I had finished this card that I had used bikabella with this same paper on one of the other sketch challenges, lol. So here she debuts again. At least I think I colored her differently. This is for the #37 sketch challenge. I flipped the card horizontally and then flipped it on its side. 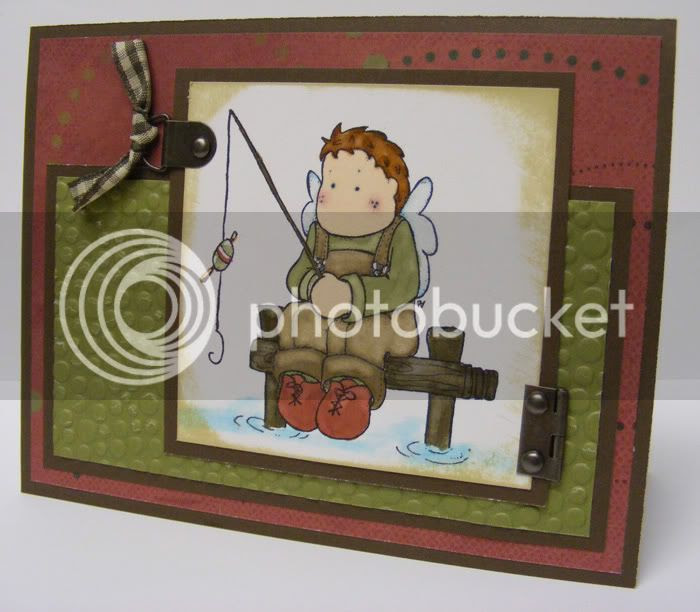 Isn't he just a cutie!!! I had asked my SBS4 sister Deb how she colored her images since they always come out so jaw-droppingly gorgeous, and she said with watercolors! Amazing right? Well... I am not so amazing, lol. I even went to the craft store to peruse the watercolors and was totally lost. So I thought to try something a little different with my waterbase markers and that was to use the blending pen that I normally use with just the ink pads. I noticed that the blending pen lightens where I brush it, and if I brush to much it almost has a bleaching effect hence the chalking on his overalls to cover up my mistake. But if I used it just a little, it made my marker coloring have that softer look of watercoloring which I loved with this image! I used the white gel pen just on the bobber and his overall clasps for some highlighting. He took me forever to color because I was trying to do it just right since he's the only image of him that I have, and I have to say I am so happy with the way he came out! He might not be perfect, but he came out great for my first time coloring like this! 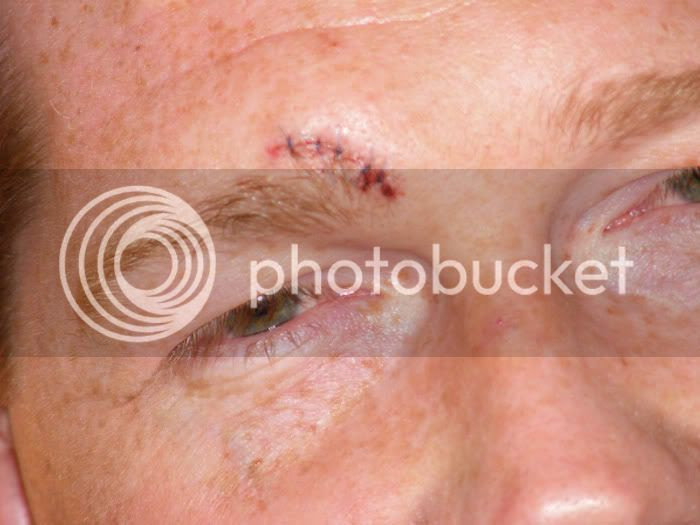 And here is a picture of the cut. What cut you ask? Well, last Saturday Paul went out shooting with some friends. One of these things he shot was a 300 Winchester Magnum (I had to write this down). Apparently, it is a HUGE rifle with massive kick. Kay showed me a picture of the size of the bullets and they are humongous!!! That cut above Paul's eye is where the SCOPE hit him! So that night, they get home at just after 8pm and ask Julie if she thinks Paul needs to get stitches. It doesn't look too bad until he raises his eyebrow and it splits wide open! So Kay took Paul to the emergency room. He ended up with 5 stitches inside and 5 stitches outside. That's male bonding for you. Go out shooting, go get stitches together, come home and joke about the whole thing, lol. The stitches came out Thursday and it doesn't look bad at all. I already have a title for the page, "SCOPED" and I just need one more picture and that's of the rifle, well maybe one of the bullets too ^_~ I wish I could have recorded them talking about it that night, it was so hilarious. Anyway, that was just some of the craziness that happened last weekend. I also made two 2-page layouts but STILL haven't finished putting the journaling on them. Hopefully I'll get that done soon so I can post those before another week goes by, lol. Next up the color challenge!

Love the colouring on your Magnolia image, perfect. Deb does some amazing work and you have had a great result with what she shared with you.

Your coloring looks perfect on your Magnolia (Edwin?) image. I lOve it. As for poor Paul, I definitely thought -- Ouch! Bet he had a bad headache, too. I can imagine how he felt. Shot a 30/30 when I was about 12 -- put me on my butt, and decided hunting really was NOT the thing for me.

Your coloring is awesome! Love the orange one, because it is my favorite color. The little boy is so cute. I like the paper you used for that one. I need to get it out and play.

You did a great job of the coloring. I too have been playing around with coloring images cuz they are so fun. I got some watercolor paper from Michaels and use my waterbrush to pick up the ink from the lid of our inks and then color in the image. It works out fairly nice. I just did an image last night that I will be posting as soon as I make it into a card. HTH

I wash your face to make room for all the kisses of tomorrow And everyday that I get to be here with you is sweet....

-Lyrics from Me by Plumb

I Heart My Followers

Unless otherwise stated all content is © Marjorie Eno. I love to share, so feel free to copy/lift any of my work for your own personal use. Please be considerate: Do not copy any of my work for submission to publication or contests. Thanks!

Marjorie
I'm a full-time student and mom of two adorable little girls. With my dear hubby having Multiple Sclerosis and my eldest daughter being on the autism spectrum our lives are a daily adventure and challenge. Crafting is one of my favorite ways to let loose and be creative!

The Four of Us